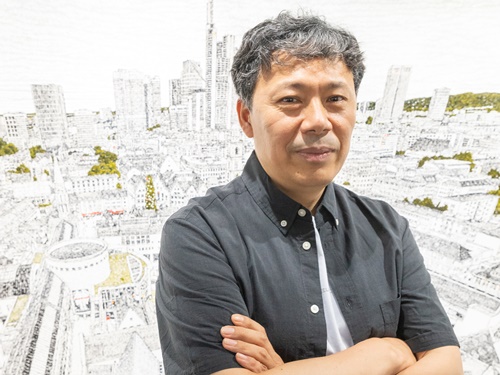 Woo Byung-chul's gaze, which overlooks the city's landscape between
sky-high buildings as if it were the omniscient writer's point of view of the
novel, reproduces the scene surprisingly vividly.
The great delicate details of the landscape, as if pictures taken, springs
from the endless sketching work , and have been established as the “in
visual language that can communicate” by pursuing the artist's own
personal experiences sincerely..

That is not a scenery occasionally looked up in the roads, buildings,
cars, etc. that extend in all directions, but a view that overlooks the city
with the viewpoint separated by two or three steps away . Complex
and dizzy structures were calmly expressed through monotone or
minimal colors, and natural trees , river and skies are appeared in them
harmonizing with the city and nature.

The flat and desolate scenery of the urban becomes reborn as a
modern version of landscape painting by his dense brush, and it widens
view of urbanites as much as the landscape created by nature
Woo Byung-chul's formative language can be defined as “a strictly
controlled screen order through the compositional features viewed from
a high place,” but above all, he focuses on the essence of 'painting'
rather than trying to find the motif or validity of his work from the outside.
He deviates from the artist's obsession with new ideas and techniques
to pursues the essence of drawing, and shows a picture of a sincere
heart toward the world rather than leaning on a well-known work
narrative.

Recalling the admiration and discouragment the 17th-century painter
Rembrandt gave him, it can be read that the writer's serious agony over
how could he communicates and delivers his own intentions to his
viewers well.

For Woo Byung-chul, the work is to show his own visual images
through the traces of time that he continuously built up in the studio
with dark curtains. The trace of time accumulated in the work inspires
the viewer by adding a dense density to his canvas. Rather than being
a painter of leading the times, it is his simple will to do his best in given
life.